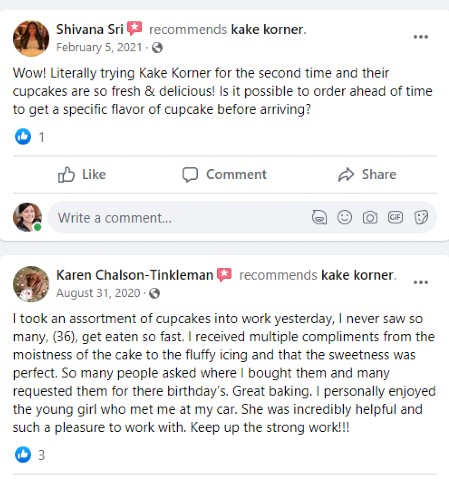 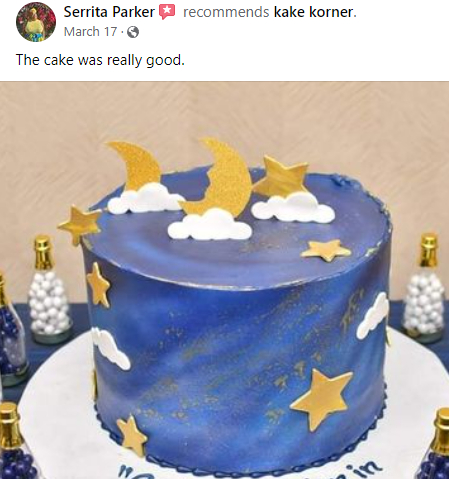 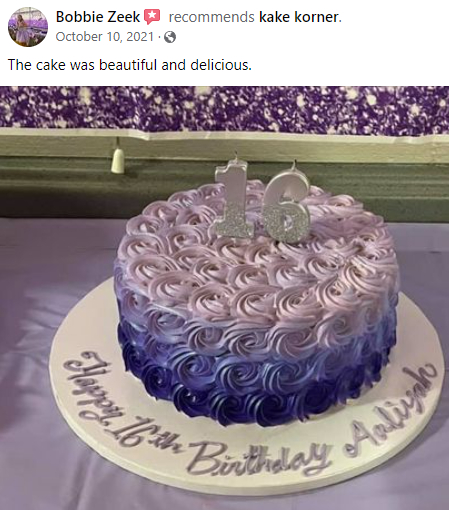 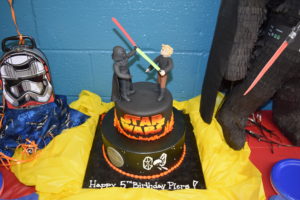 Everything was great! The marble cake was addictive, it was the best tasting cake yet! Thanks so much again!

I can’t thank you and your team enough for making the perfect cake for my son’s birthday. It looked amazing and tasted even better. Everyone raved about how good it was and several took your contact information. You help to make my family’s celebrations so incredibly special and wanted to let you know how much you all are appreciated!
Have a great day!
Airis
TESTIMONIALS

We love to share the comments from our customers!

I absolutely love this place. All the cakes are beautiful and taste so great. Everyone is so nice and lovely and help you achieve the cake you want. The cupcakes are to die for, and have the best flavors. I’ve been going here for years and would never get a cake from anywhere else!
Sharonda Mills

I purchased a custom Mickey Mouse two tier cake with a small smash cake for my sons first birthday party. The cake was AMAZING! It was so fresh and not too sweet. All of the guests loved it. I will be ordering again for my next event.
Nicole Harvest

We got cupcakes from Kake Korner for a friend’s wedding. They were moist and delicious. They also had a very large selection of flavors in their Cupcake Room available for pickup anytime. The customer service was also very good.
Stephanie Mbelu

They did an amazing job on our custom wedding cake. Red Velvet with an American flag theme. My wife (Fiance at the time) sketched out some quick pictures on the spot and the end result was better than we could of imagined! The cake was delicious, price was great, and they nailed the request without even needing a followup call or visit! Very professional! Couldn’t of asked for a better wedding cake. (Wedding was June 2008 came back here to get my wife an extra special Birthday cake and saw the opportunity to write a review).
Stephen Louderback 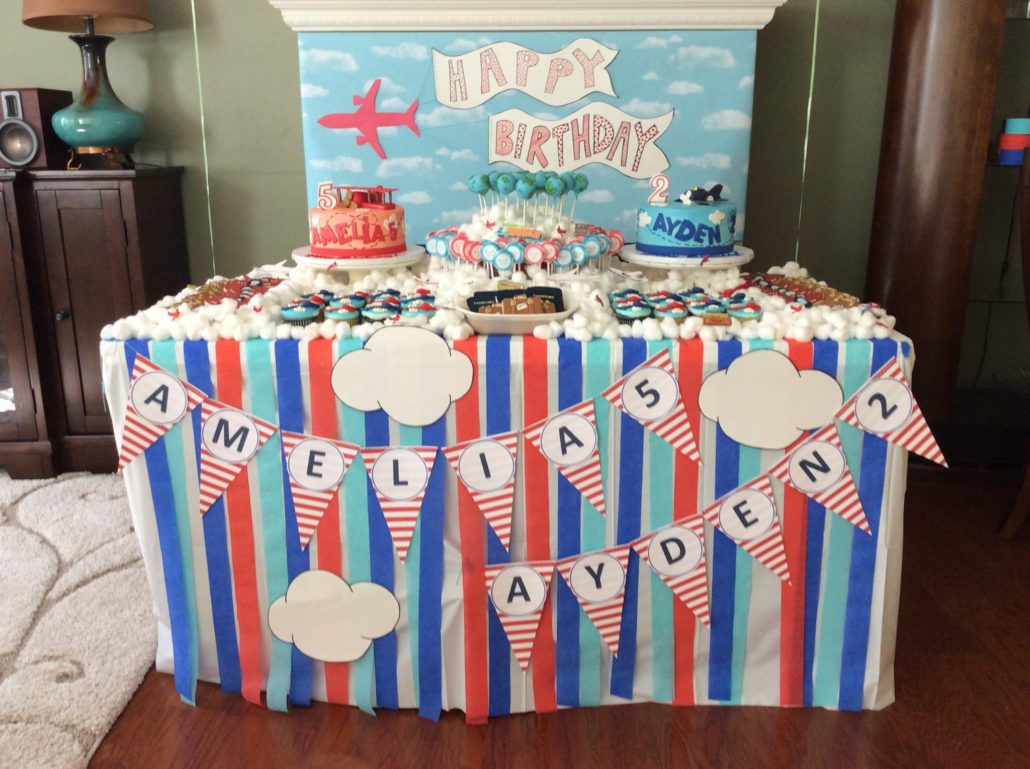 Recently posted on Facebook – work we did for Everyday Events.  Looks great!

Walking through the front door of Kake Korner in Laurel, it’s impossible to avoid the sweet scent of buttercream icing drifting across the room. White walls neatly outlined with pink trimming lead customers around the business, beginning with a display case in a room to the right, holding over 30 flavors of different cupcakes.

It isn’t long before people are lured to the other side of the business, where three tall decorative cakes and two sets of detailed cupcakes don first- and second-place ribbons from the 2015 Great American Cake Show last month in Waldorf.

On the bottom layer – or tier – of one cake, decorator Michelle Lowman, of Jessup, used fondant icing, known as a cake coating or filling, to design the ruffles of a yellow dress. The next two tiers included a white ascot surrounded by a blue dress coat and a shelf stacked with books; all made of icing. At the top: The Enchanted Rose from Disney’s “Beauty and the Beast.”

“It’s something that I think is kind of old, so it’s not as popular,” Lowman said of “Beauty and the Beast,” which was released in 1991. “Everyone does ‘Frozen.’ I kept on track with that and it took, on-and-off, about two weeks to finish it. I went here [to Kake Korner], I went home, I worked on it every chance I got.”

Working long days into late nights, Lowman said she kept putting more and more detail into her cake until the day of the competition, adding beloved “Beauty and the Beast” characters, including Lumière, Cogsworth and Chip Potts. Her work earned her first place in the advanced tiered category.

“Everyone who entered from here placed in all of the categories that we did,” she said. “For me, competing pushed me to do a cake that I didn’t think I would really get to do here because of the theme being “Beauty and the Beast.” I don’t think it’s as popular and people are kind of picky. It’s not like a home order, where someone gives you a theme and they let you do whatever.”

Lowman said the majority of Kake Korner’s customers come with an image of their ideal cake already in mind. The decorators will then abide by the customer’s descriptions, often using pictures from online provided by the customer.

To spice things up, White said she wanted her employees to participate in the yearly competition to showcase their work.

“It was good for them to be able to express what they always wanted to express on a cake here but can’t because nobody is going to order it,” she said, referring to Lowman’s “Beauty and the Beast” that would cost anywhere from $2,000 of $5,000, depending on size, amount of feeding and design. “They got to go wild for the competition and show their skills. That, to me, made me happy. I feel good for them, plus it gives them a good ego boost and a good feeling about their skills.”

“I’ve always wanted to do these types of cakes,” Thomas said. “I wanted to do something my own way. I love being creative and doing different things every day.”

Thomas said her hands are her most important tool used to achieve the intricate designs of the classic film’s backgrounds and characters. Additional winners include Jordan Spooner, 24, of Catonsville, who took second place for her Anime-inspired cake and Amanda Marcelle, 25, of Glenelg, who came in first place for both her teapot cupcakes and “The Legend of Zelda: A Link to the Past” video game cake.

After 12 years of owning and operating Kake Korner, White said she’s proud of her staff. 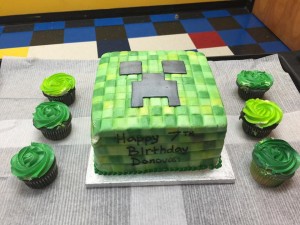 Pictures don’t even do this cake justice! Amazingly beautiful & delicious as always! Everyone at my son’s birthday was blown away by how delicious the cake was… Vanilla with chocolate Bavarian filling. Cupcakes were also amazing (6 chocolate and 6 snicker doodle). I really can’t say enough nice things about the Kake Korner. This is where all of my cakes come from and I look forward to ordering from them for my next family event.
Natalie Malhotra on Facebook

Great story – young pizza-loving couple get married on Pi Day, with a special cake from the Kake Korner!

I just wanted to share this article with you guys! You made our cake for our wedding and it was featured in an article on WTOP! Thanks for an awesome cake!
Arlington resident Katie Hendrickson loves three things: math, pizza and her fiancé — in no particular order. And that combination made her decision to get married in a D.C. pizza shop on Saturday, March 14, an easy one….
Click here to read the story at WTOP!